Home › The Intercept › The Killing of a Portland Antifascist Activist Went Unsolved. Then Journalists Sued the City.

The Killing of a Portland Antifascist Activist Went Unsolved. Then Journalists Sued the City.

For months after her son’s killing, Laura Kealiher waited for the results of a police investigation. The case seemed an easy one: Sean Kealiher, a 23-year-old antifascist well known in Portland’s protest scene and to police, was run over by a car following an argument outside a bar popular with leftist activists. As he bled on the sidewalk, the people in the car left on foot, leaving the vehicle behind. Surveillance cameras captured much of the incident.

That was October 2019. More than a year later, as Portland had become the epicenter of a national protest movement following the police killing of George Floyd, Laura Kealiher, frustrated by authorities’ inaction, took to Facebook, where in a public video she named two of the men that she said were in the car that night. A detective called her, asking to know how she knew their identities. Still, the investigation went nowhere.

This month, one of the men, Christopher Knipe, was arrested after confessing to police that he was at the wheel of the car that killed her son. On Tuesday, he was arraigned on second-degree murder charges and entered a not guilty plea.

Laura Kealiher, who had missed a call from the district attorney’s office and learned about the arrest when the news became public, questioned the timing of the arrest: nearly three years after Sean’s killing and long after she had revealed Knipe’s identity (though she had publicly posted that she believed he was only a passenger in the car, and that another man was at the wheel). Kealiher also credited The Intercept, which filed a lawsuit against the city of Portland over the police investigation records in the case, with pushing police to finally solve it.

“They would have let this go nowhere if it hadn’t been for you guys,” Kealiher told The Intercept. “They literally, in my opinion, waited until they were like, ‘Oh, shit. They’re going to prove that we have not done anything even though we have all this evidence.’”

Last March, The Intercept published a long feature and podcast about the case, detailing Sean Kealiher’s life and death as well as the long-running and intensifying conflict in Portland between far-left and far-right groups. In the story, his mother and many of his friends suggested that Portland police had no interest in solving the murder of an activist who made no secret of his contempt for them. “They know who owns the car, I think everybody knows who owns the car,” a fellow antifascist activist told The Intercept at the time, speaking on condition of anonymity in accordance with a common conviction among antifascists about the need to protect their identities. “You’d think they’d just go arrest the guy, but they haven’t. And they won’t, because Sean was somebody they hated.”

Before publication of its story and podcast, The Intercept filed a series of public records requests, seeking documentation that would show what police had done to investigate the case. In June 2021, we sued the city for failure to comply with public records laws. Separately, Oregon Public Broadcasting, which covered Sean Kealiher’s killing in a podcast series of its own, also sued the city for records, and was in the process of appealing the city’s redactions when Knipe was arrested.

The legal actions led to some disclosures — over 2,000 pages of heavily redacted documents — but the city refused to release most records, including those that would answer The Intercept’s core question: Were police doing anything to solve this case?

That question remains unanswered, as does the question of whether police belatedly made an arrest in the case only as a result of legal pressure from The Intercept and OPB. 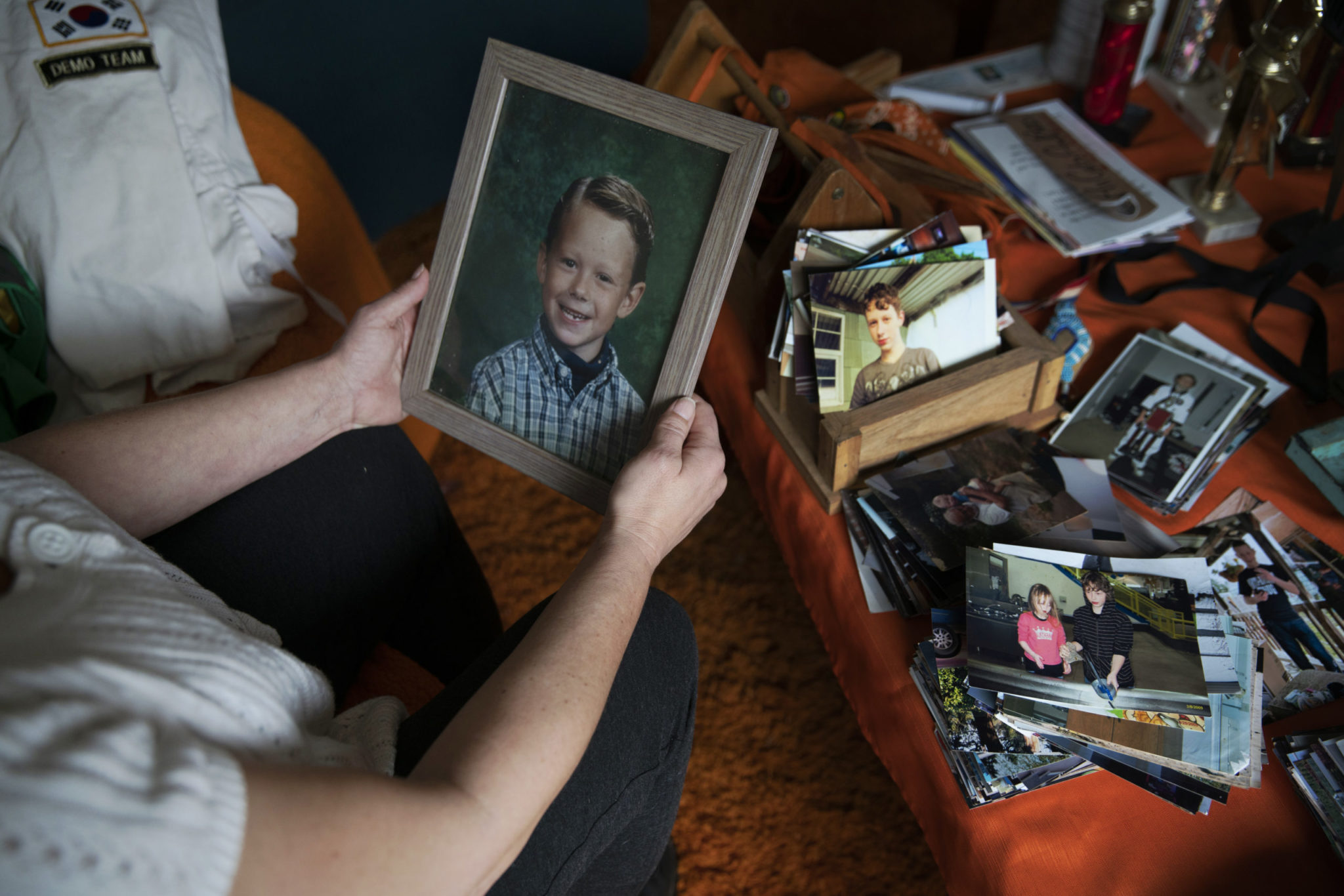 Laura Kealiher holds a childhood photo of her son Sean Kealiher, in Portland, Ore., on Jan. 30, 2021.

Photo: Brooke Herbert for The Intercept

It’s not clear, for instance, when police obtained surveillance video of the incident, cited in court documents, that reportedly shows Knipe driving away from the bar, then turning around, hitting Sean Kealiher, and finally “nonchalantly walking away from the crash.”

Laura Kealiher believes police had that video all along, and noted that one of the prosecutors originally assigned to the case had told her early on that homicide charges would be filed soon. When that prosecutor left the office, a few months later, the new one told her that the assessment had been premature, and that the first prosecutor should have never told her that homicide charges were imminent. For two years, the office had no updates for her, until this summer.

It’s also not clear when police first interviewed Knipe, whose name was known to them at least since Laura Kealiher made it public in 2020. And it’s unknown when they first interviewed a key witness in the case, a co-worker of Knipe, who went on the record for the first time on OPB’s podcast. In an article last week, OPB suggested that the litigation by them and The Intercept’s “may have played a role” in the case.

“Looking at the timing, and the evidence that was presented in the probable cause affidavit for Christopher Knipe’s arrest, it seems like those lawsuits did maybe play a factor, because I think there were so many legal arguments against the city that there was probably this sense that these records were going to come out, eventually,” Ryan Haas, a news editor at OPB who closely followed the case, told The Intercept. “I do think the onus is on the police now, because I think this case, with the way this played out, implies that Laura’s arguments were correct. You knew who this person was, for a long time, and you did nothing about it. So what was the deal?”

Court documents indicate that when police first spoke to Knipe as part of their investigation, he told them that his car had been stolen on the evening it had been used in the killing. But it wasn’t until June of this year — just after The Intercept’s legal team filed a motion for summary judgment in its public records case — that police pushed back on his story and confronted him with the video evidence. While Knipe allegedly admitted to driving the car that killed Sean Kealiher on that occasion — telling police, according to court records, “I guess I better come clean” — he was not arrested until several weeks later, on August 4. That’s a day before OPB was supposed to receive a ruling about a motion to unredact some of the files, and two weeks before The Intercept and the city of Portland were scheduled to appear before a judge for a hearing that might conclude the case. Both publications are continuing to pursue records of the investigation.

“There is a potential for more of a case for transparency here,” said Haas. “I think there are a lot of unanswered questions in this case still.”

Rian Peck, a Portland-based attorney who is representing The Intercept in the case, called the timing of Knipe’s arrest “suspicious.”

“In the years since Sean’s killing, the city, police, and prosecutors have hinted that they were waiting for some big break in the investigation — some new piece of evidence or new witness. But it turned out that all it took was confronting Knipe with the video evidence and, boom, they have an admission,” Peck said. “It’s unclear why they couldn’t have done that years ago, before we filed The Intercept’s summary judgment motion. That’s why we still need access to these public records. The public deserves to know what police knew and when.”

Elisabeth Shepard, a spokesperson for the Multnomah County District Attorney’s Office, which is prosecuting Knipe, declined to comment on the specifics of the case. “It is interesting timing,” Shepard told The Intercept. “But that’s not something that’s under our authority to be able to discuss, particularly because our goal is to convict the person that murdered this person, that’s our one job.” Knipe’s court-appointed attorney, Russell Barnett, told The Intercept that he wouldn’t be able to comment on the case in detail until after reviewing discovering material.

“The time between the incident and the arrest was surprisingly long,” he added. “But every case is different. That was just my first thought on reading it, but there may be reasons, I don’t know.”

Sgt. Kevin Allen, a spokesperson for the Portland Police Bureau, declined to answer questions about when police obtained surveillance video and when they first spoke to Knipe. He added that he had “no information” about The Intercept and OPB’s lawsuits and deferred questions to the Office of the City Attorney. But the lead detective on the homicide investigation, Detective Scott Broughton, knows about The Intercept’s case: In May and July, he signed declarations that were filed in court to support the city’s motion for summary judgment.

“While an arrest has been made, the criminal justice process is still underway,” Allen wrote in an email to The Intercept. “Much more information will be made public later.” A spokesperson for the City Attorney’s office did not respond to a request for comment.

Knipe’s arrest hardly felt like resolution to Laura Kealiher, who has come to embrace many of her late son’s views, including a rejection of police, courts, and the carceral system. She wanted police held accountable, she said, not a man held in prison potentially for decades.

“What’s the guy going to prison going to do?” she told The Intercept. “It’s not going to bring Sean back. I wish we had a restorative justice setup. Because for me, literally what I have wanted from the beginning is, I want to sit down with the person who killed my son. I want to hear his life story. I want to know: What are you going to do to change that life so you don’t do something this disgusting ever again?”

“But that’s not how it works,” she added. “Instead, he is going to be put in a penal system where he’s probably going to be abused or victimized. And that’s not what Sean would want.”

The post The Killing of a Portland Antifascist Activist Went Unsolved. Then Journalists Sued the City. appeared first on The Intercept.

‹ Donald Trump Has His Own History With the Espionage Act
Bad Data “For Good”: How Data Brokers Try to Hide in Academic Research ›