Home › The Intercept › Proud Papa: How Joe Biden Became the Father of the Iranian Nuclear Bomb

Proud Papa: How Joe Biden Became the Father of the Iranian Nuclear Bomb 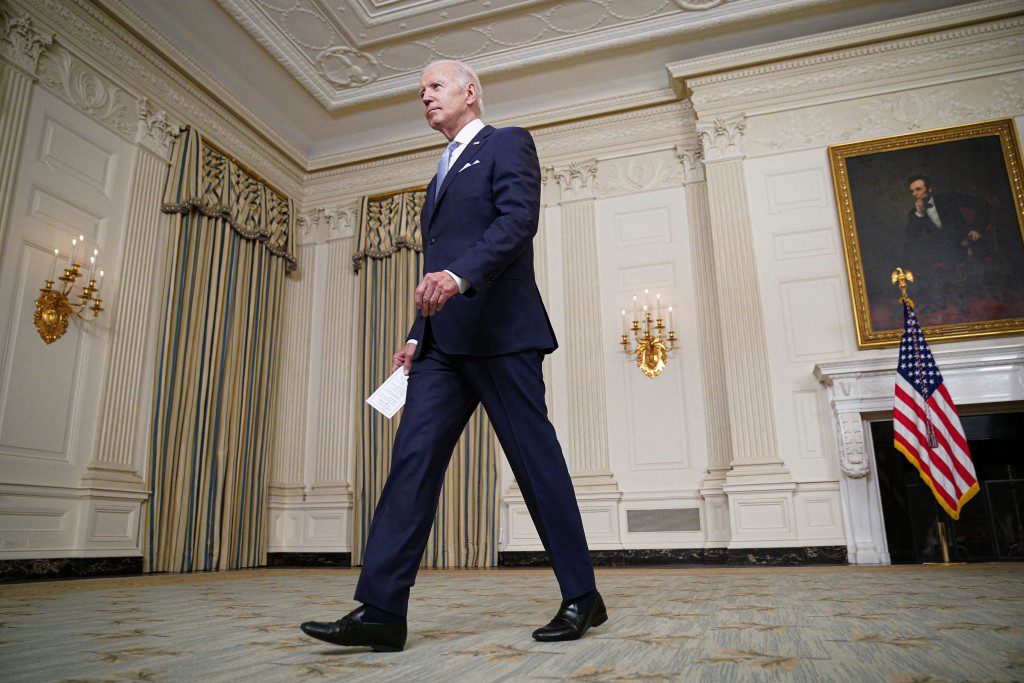 President Joe Biden in the State Dining Room of the White House in Washington, D.C., on July 28, 2022.

President Joe Biden has struggled mightily to pass any part of his domestic agenda. Yet there is one outcome he can take direct credit for, an accomplishment that, because of Washington’s screwed-up political incentives, he pulled off with almost no opposition.

After decades of halting progress to develop nuclear weapons capacity, Iran is now turning the final screws to bring them to that threshold. Iran is now closer than ever to developing an actual nuclear weapon — beyond the point where assassinations, sabotage, or even a campaign of airstrikes could significantly hinder its nuclear capacity. Both hawkish and dovish segments of the U.S. press point to a plain fact undergirding this development: The nuclear deal struck in 2015 is toast.

Iran’s path to the bomb has been helped by Biden’s stubborn refusal to make the compromises necessary to revive the 2015 nuclear deal.

Iran’s path to the bomb is of course of its own making, but it has been helped along the way by Biden’s stubborn refusal to make the compromises necessary to revive the 2015 nuclear deal. Biden’s predecessor Donald Trump withdrew from the deal in a fit of pique, and Biden campaigned on getting back in. When push came to shove, however, Biden refused to undo Trump’s aggressive measures.

It’s hard to say that the nuclear deal is definitively finished because, in theory, both parties could miraculously come to terms at any time. It could be accurately described as a zombie: not quite dead, but not about to have life breathed back into it either.

White House Middle East coordinator Brett McGurk reportedly told a group of think tank experts this Wednesday that any return to a deal was “highly unlikely.” Earlier, the European Union’s top diplomat, Josep Borrell Fontelles, said, “I have concluded that the space for additional significant compromises has been exhausted.” Both sides must now sign the deal on the table if they want to move forward, he added. The problem is that both the Americans and Iranians have already said that the deal currently on the table is unacceptable.

The Americans deserve the bulk of the blame: It was the U.S. that violated the agreement in the first place. Now, both sides — as well as regional countries — will be worse off amid the continuing fallout.

Perhaps the most interesting statement about the death of the nuclear deal came from the country whose political leadership did the most to kill it: Israel.

In an article published in Time this week, Ehud Barak, a former Israeli prime minister, laid out his case for why the end of the deal has ensured that Israel’s worst fears of a nuclear Iran will now become a reality. “This summer, Iran will turn into a de-facto threshold nuclear state,” Barak wrote, adding that Iran’s uranium enrichment program had now advanced to a point where it could be no longer be set back with military strikes or sabotage.

Barak, far from a dove, argued that the U.S. and Israel should have made plans to immediately attack Iran in 2018 after pulling out of the nuclear deal. For “unexplainable reasons” they failed to take this step, which would have set the program back by years. Instead, nuclear progress continued despite Trump’s “maximum pressure” campaign. Iran’s enrichment programs are now beyond the point where they could be effectively targeted by outside attack.

Barak said that the ship had sailed on stopping a nuclear Iran. In lieu of even some weaker, limited new nuclear deal, Barak wrote, Israel and its neighboring states must simply try to contain an Iranian state that has finally crossed the nuclear threshold.

Iran has said, at least, that it will not build an actual nuclear bomb, and it likely won’t do so any time soon. Even after developing the capacity, mastering the technology necessary to deliver a warhead will take some time. The ability to maintain plausible deniability is also important for the Iranian government, which would like the benefits of a nuclear deterrent without taking the political heat. (Israel has maintained a policy of ambiguity — refusing to confirm or deny its nuclear arsenal — for decades for this reason.)

Recently, while noting that there was no decision to build a weapon, a top Iranian official said that Iran, in fact, has “the technical ability to build a nuclear bomb.” The statement was later walked back by the Iranian side but reflected a significant shift in tone from past statements that have been clearly against even the possibility of nuclear weapons development. 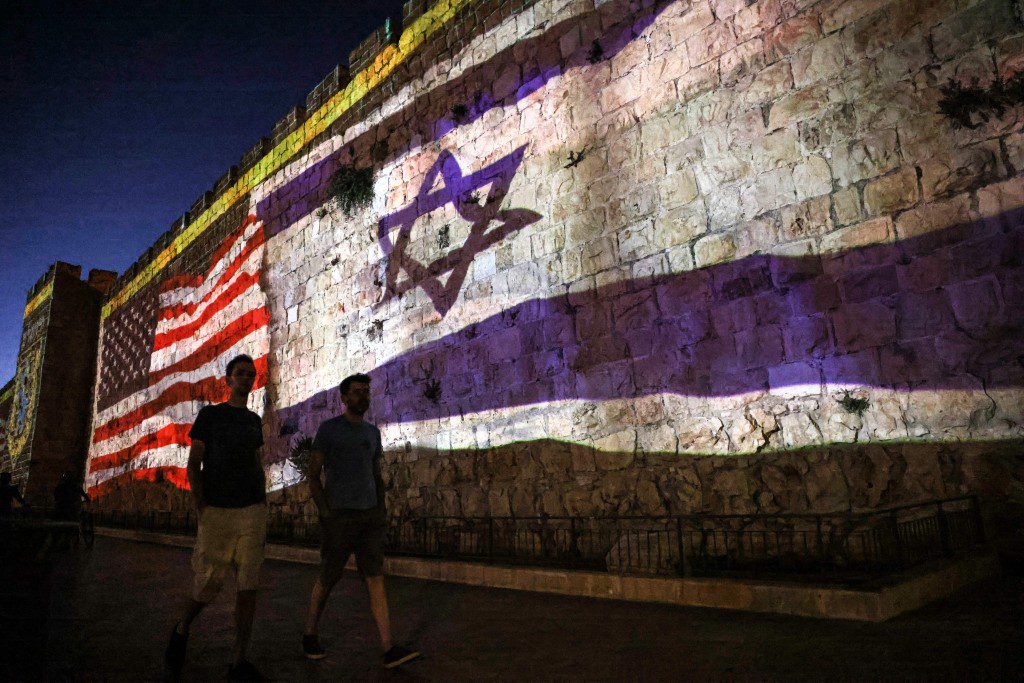 The Israeli and U.S. flags are projected on the wall of the old city of Jerusalem during President Biden’s visit on July 13, 2022.

Biden’s response to all these events has been the worst of all worlds: disappointing his pro-diplomacy base while failing to placate his political enemies.

The nuclear deal was the signature diplomatic agreement of the Obama administration, in which, of course, Biden served as vice president. Upon taking office, Biden had a strong political opportunity to snap back into U.S. compliance with the deal, the minimum terms of which the Iranians had continued upholding despite Trump’s maximum pressure campaign.

Instead, in apparent fear of angering his political opponents by looking weak, Biden declined to immediately reenter the agreement that was signed — something that Iranian officials indicated that they would’ve accepted once he took office. Due to domestic political pressures, Biden continued playing hardball instead of making a good-faith bid to reenter the deal. Now, it looks like he has nothing to show for any of it.

In the real world, outside of the funhouse-mirror debates of American politics, a nuclearized Iran is likely to seriously constrain U.S. decision-making in the region for generations to come.

The U.S. technically could wage a full-scale war against Iran that would eliminate or severely degrade the nuclear program, even possibly leading to the collapse of the Iranian state. Outside of a few particularly psychopathic corners of Washington, however, there is little appetite among U.S. elites for starting such a massive conflict. The American public is even less likely to support it. After two exhausting decades of fighting futile wars in the Middle East, the idea of starting yet another with a country over twice the size of Iraq would be politically radioactive for any president.

The U.S. is largely stuck now with a long-term mess of its own making. Negotiating with Iran was often depicted by U.S. leaders as doing a favor to the Islamic Republic. The reality, though, was that the deal served legitimate U.S. interests: preventing nuclear proliferation, while sparing Americans from another armed conflict in the region.

Contrary to the statements of longtime Israeli Prime Minister Benjamin Netanyahu and his backers in the U.S., who tend to dominate Israel lobby organizations, the deal also served the interests of Israel, according to Barak and many other current and former Israeli political and intelligence officials. Former Mossad director Tamir Pardo, of all people, has said that withdrawal from the deal was nothing less than a “tragedy.”

That tragedy is now becoming tangible reality — on Joe Biden’s watch. Although Trump started the process that brought us to this point, it was only thanks to Biden’s mixture of weakness and indecision that the world will now likely be faced with a Middle Eastern equivalent of North Korea, rather than a version of Iran, as envisioned by the nuclear deal, that may have become economically dependent on the West.

For this, Biden has only himself to blame. He hasn’t accomplished much as president, but it looks like Biden will have one legacy achievement to look back upon: fathering the Iranian nuclear bomb.

The post Proud Papa: How Joe Biden Became the Father of the Iranian Nuclear Bomb appeared first on The Intercept.