The Pentagon envisions a future in which Elon Musk’s rockets might someday deploy a “quick reaction force” to thwart a future Benghazi-style attack, according to documents obtained by The Intercept via Freedom of Information Act request.

In October 2020, U.S. Transportation Command, or USTRANSCOM, the Pentagon office tasked with shuttling cargo to keep the American global military presence humming, announced that it was partnering with Musk’s SpaceX rocketry company to determine the feasibility of quickly blasting supplies into space and back to Earth rather than flying them through the air. The goal, according to a presentation by Army Gen. Stephen Lyons, would be to fly a “C-17 [cargo plane] equivalent anywhere on the globe in less than 60 minutes,” an incredible leap forward in military logistics previously confined to science fiction. A USTRANSCOM press release exclaimed that one day SpaceX’s massive Starship rocket could “quickly move critical logistics during time-sensitive contingencies” and “deliver humanitarian assistance.” While the Pentagon alluded to potentially shuttling unspecified “personnel” through these brief space jaunts, the emphasis of the announcement was squarely on moving freight.

But USTRANSCOM has more imaginative uses in mind, according to internal documents obtained via FOIA. In a 2021 “Midterm Report” drafted as part of its partnership with SpaceX, USTRANSCOM outlined both potential uses and pitfalls for a fleet of militarized Starships. Although SpaceX is already functionally a defense contractor, launching American military satellites and bolstering Ukrainian communication links, the report provides three examples of potential future “DOD use cases for point to point space transportation.” The first, perhaps a nod to American anxieties about Chinese hegemony, notes that “space transportation provides an alternative method for logistics delivery” in the Pacific. The second imagines SpaceX rockets delivering an Air Force deployable air base system, “a collection of shelters, vehicles, construction equipment and other gear that can be prepositioned around the globe and moved to any place the USAF needs to stand-up air operations.” 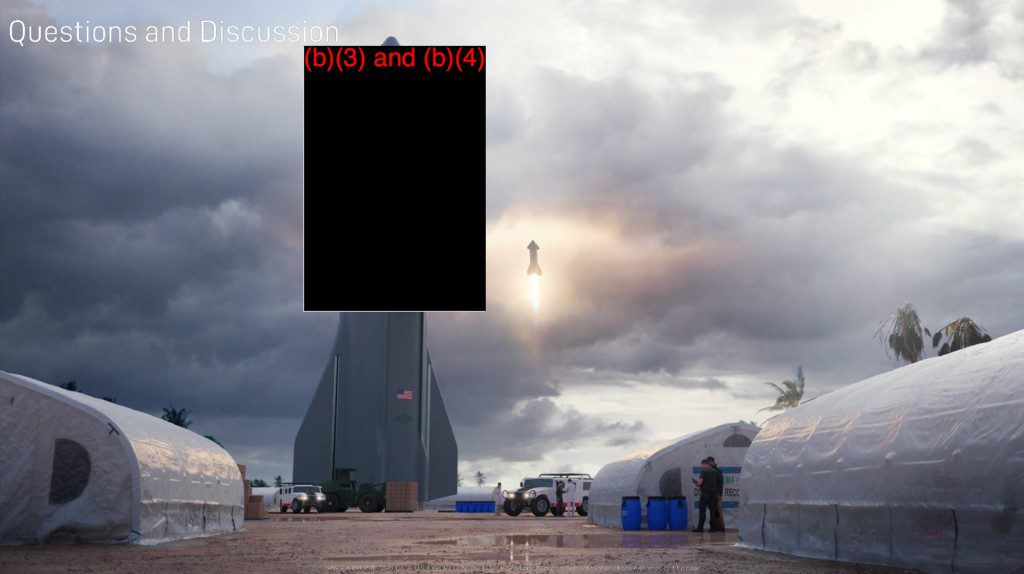 A partially redacted illustration of a SpaceX Starship vessel.

But the third imagined use case is more provocative and less prosaic than the first two, titled only “Embassy Support,” scenarios in which a “rapid theater direct delivery capability from the U.S. to an African bare base would prove extremely important in supporting the Department of State’s mission in Africa,” potentially including the use of a “quick reaction force,” a military term for a rapidly deployed armed unit, typically used in crisis conditions. The ability to merely “demonstrate” this use of a SpaceX Starship, the document notes, “could deter non-state actors from aggressive acts toward the United States.” Though the scenario is devoid of details, the notion of an African embassy under sudden attack from a “non-state actor” is reminiscent of the infamous 2012 Benghazi incident, when armed militants attacked an American diplomatic compound in Libya, spurring a quick reaction force later criticized as having arrived too late to help.

As much as American generals may be dreaming of rocket-borne commandos fighting off North African insurgents, experts say this scenario is still squarely the stuff of sci-fi stories. Both Musk and the Pentagon have a long history of making stratospherically grand claims that dazzling and entirely implausible technologies, whether safe self-driving cars and hyperloop or rail guns and missile-swatting lasers, are just around the corner. As noted in another USTRANSCOM document obtained via FOIA request, all four Starship high-altitude tests resulted in the craft dramatically exploding, though a May 2021 test conducted after the document’s creation landed safely.

“What are they going to do, stop the next Benghazi by sending people into space?” said William Hartung, a senior research fellow at the Quincy Institute who focuses on the U.S. arms industry and defense budget. “It doesn’t seem to make a lot of sense.” Hartung questioned the extent to which a rocket-based quick reaction force would be meaningful even if it were possible. “If a mob’s attacking an embassy and they dial up their handy SpaceX spaceship, it’s still going to take a while to get there. … It’s almost like someone thinks it would be really neat to do stuff through space but haven’t thought through the practical ramifications.” Hartung also pointed to the Pentagon’s track record of space-based “fantasy weapons” like “Star Wars” missile defense, elaborate projects that soak up massive budgets but amount to nothing.

SpaceX did not respond to a request for comment. In an email to The Intercept, USTRANSCOM spokesperson John Ross wrote that “interest in PTP deployment is explorative in nature and our quest for understanding what may be feasible is why we’ve entered into cooperative research and development agreements like the one you reference,” adding that “the speed of space transportation promises the potential to offer more options and greater decision space for leaders, and dilemmas for adversaries.” Asked when USTRANCOM believes a rocket-deployed quick reaction force might actually be feasible, Ross said the command is “excited for the future and believe it’s possible within the next 5-10 years.”

“My two cents are that it’s unlikely that they would be able to evacuate anyone quickly via rocket,” said Kaitlyn Johnson, deputy director of the Center for Strategic and International Studies’ Aerospace Security Project. Johnson pointed out that even if the underlying technology were sound, the small question of where to land an enormous 165-foot Starship rocket, the world’s largest, remains. “If it’s in a city, it’s not like they can land [a] Starship next to the embassy.” In the hypothetical embassy rescue mission, “you still have logistics issues there about getting forces onto the launch vehicle and then again on where you could land the vehicle and how to get the forces from the landing site to the base/embassy,” Johnson added, “which has not been tested or proven and in my opinion is a bit sci-fi.”

“What are they going to do, stop the next Benghazi by sending people into space? It doesn’t seem to make a lot of sense.”

The document also nods at another potential hitch: Are other countries going to let SpaceX military rockets drop out of space and onto their turf? The unrealized vision of American “Starship Troopers” is not a new one: As far back as the 1950s, Nazi rocket scientist turned American space hero Wernher Von Braun pondered transporting U.S. troops via rocket, and in the 1960s, defense contractor Douglas Aircraft pitched “Project Ithacus,” a spacecraft carrying 1,200 soldiers to their destination in an hour. More recently, according to one 2006 Popular Science report, the Pentagon has dreamed of an age in which “Marines could touch down anywhere on the globe in less than two hours, without needing to negotiate passage through foreign airspace.” But the USTRANSCOM paper admits that Cold War-era treaties governing the use of space provide little guidance as to whether an American rocket could bypass sovereign airspace concerns by cruising through outer space. “It remains unclear whether and how vehicles are subject to established aviation laws and to what extent, if any, these laws follow them into space for PTP space transportation,” reads one section. “Moreover, the lack of a legal definition of the boundary between air and space creates an issue of where the application of aviation law ends and space law begins.” The document does hint that part of SpaceX’s promise could be to leap over these concerns. Following a redacted discussion of a hypothetical military Starship’s legal status while in flight, USTRANSCOM noted: “This recovery places the Starship outside of altitudes typically characterized as controlled airspace.”

Brian Weeden, director of program planning for the Secure World Foundation, a space governance think tank, told The Intercept that territorial concerns are just one of many, “along with whether or not the countries the rocket/spaceship pass over regard it as a weapon or ballistic missile threat or not.” Hartung argued that SpaceX, despite its “Mr. Clean” image as a peaceful enabler for cosmic exploration, is contributing to the global militarization of space. And as with drones, once an advanced and exclusively American technology begins proliferating, the U.S. will have to face its implications from the other side. “The question is, what would keep other countries from doing the same thing, and how would the U.S. feel about that?” asked Hartung. “This notion that going anywhere without having to get any approval from anybody has appeal from a military point of view, but would the U.S. want other countries to have that same capability? Probably not.”

‹ The Interstate Tug-of-War Over Reproductive Freedom
Pass the "My Body, My Data" Act ›