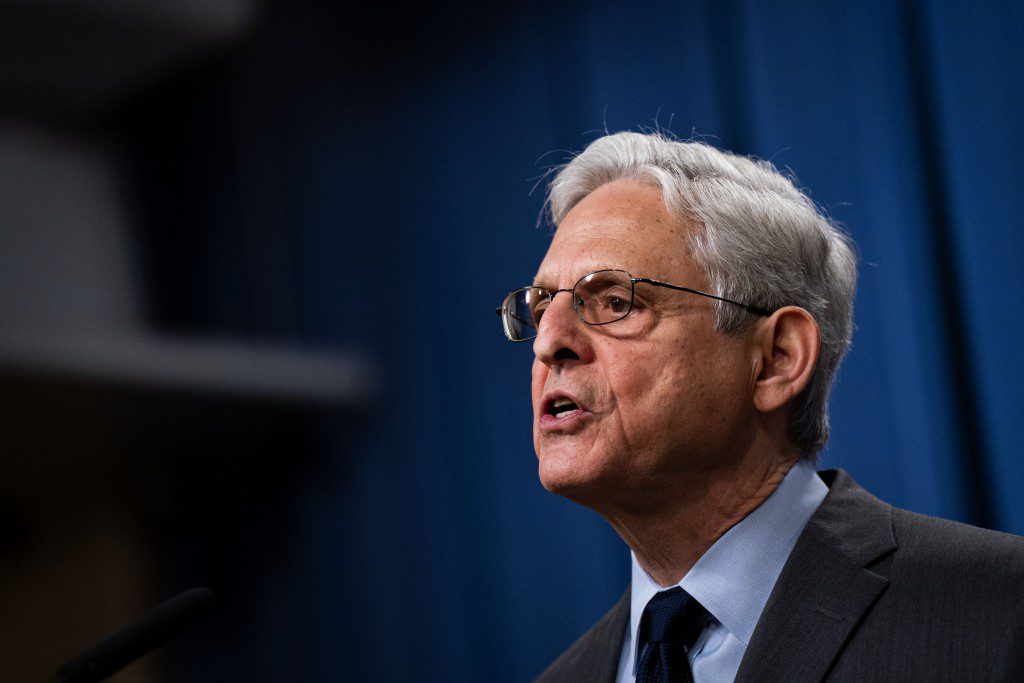 Attorney General Merrick Garland speaks at the Department of Justice in Washington, D.C., on Oct. 24, 2022.

In the movie “Pirates of the Caribbean,” the pirates swear by a supposedly ironclad set of rules that determine how they conduct their pirating, thieving, and killing.

But it turns out that there are loopholes in the so-called Pirate’s Code.

“The code is more what you’d call guidelines than actual rules,” pirate Hector Barbossa explains, as he violates it.

I was thinking about Barbossa’s great line when I read Attorney General Merrick Garland’s new media guidelines, laying out when the Justice Department can go after journalists to identify their sources during criminal investigations into leaks of classified information.

Since the new policy was announced last month, Garland has been praised by media experts and journalists for imposing tight new restrictions on the government’s ability to target reporters in leak investigations.

“This is a watershed moment,” said Bruce Brown, executive director of the Reporters Committee for Freedom of the Press. “The new policy marks a historic shift in protecting the rights of news organizations reporting on stories of critical public importance.”

Fred Ryan, the publisher of the Washington Post, added that “the new protections for the news media … deserve recognition and gratitude.”

But Garland’s new policy includes plenty of vague language that could still make it relatively easy for eager prosecutors to go after reporters’ sources. In fact, Garland issued the policy even as the Justice Department is seeking to prosecute Julian Assange, the WikiLeaks founder; the Assange case suggests that there are already loopholes built into Garland’s new guidelines.

Worse, the policy lacks the force of law, and can be changed or ignored by the next attorney general.

Skepticism is warranted when it comes to the Justice Department and its media guidelines. After all, Garland felt compelled to issue the latest set of guidelines because the earlier ones, issued in 2015 by Eric Holder, the Obama administration’s attorney general, offered only paper-thin protections for journalists.

Holder’s guidelines were also met with effusive praise from journalists when they were issued. But they didn’t impose any real limits on prosecutors’ ability to go after journalists. (I had firsthand experience with Eric Holder’s Justice Department; the Obama administration threatened to put me in prison for refusing to reveal my sources.)

After Trump attacked journalists and vowed to go after leakers during the 2016 campaign, his first attorney general, Jeff Sessions, said he would review Holder’s guidelines to see if adjustments were needed. But the Holder guidelines were so weak that they allowed the Trump administration to target whistleblowers and journalists at a blistering pace. They were still in place when the Trump Justice Department secretly obtained the phone records of reporters for the Washington Post, the New York Times, and CNN.

It wasn’t until several months after coming into office in 2021 that the Biden administration publicly disclosed that the reporters’ records had been seized by Trump’s DOJ, raising questions about why the Biden administration had kept the matter secret. Garland then came under pressure to develop new media guidelines. A draft of those guidelines was issued in July 2021, and the final version was released on October 26.

On paper, Garland’s guidelines look much better than Holder’s. They are worded more strongly and seem to include fewer exceptions to limits on subpoenaing reporters or seeking their records. “The [Justice] Department recognizes the important national interest in protecting journalists from compelled disclosure of information revealing their sources, sources they need to apprise the American people of the workings of their government,” the Garland guidelines state. “For this reason, with the exception of certain circumstances set out below, the Department of Justice will not use compulsory legal process for the purpose of obtaining information from or records of members of the news media acting within the scope of newsgathering.” 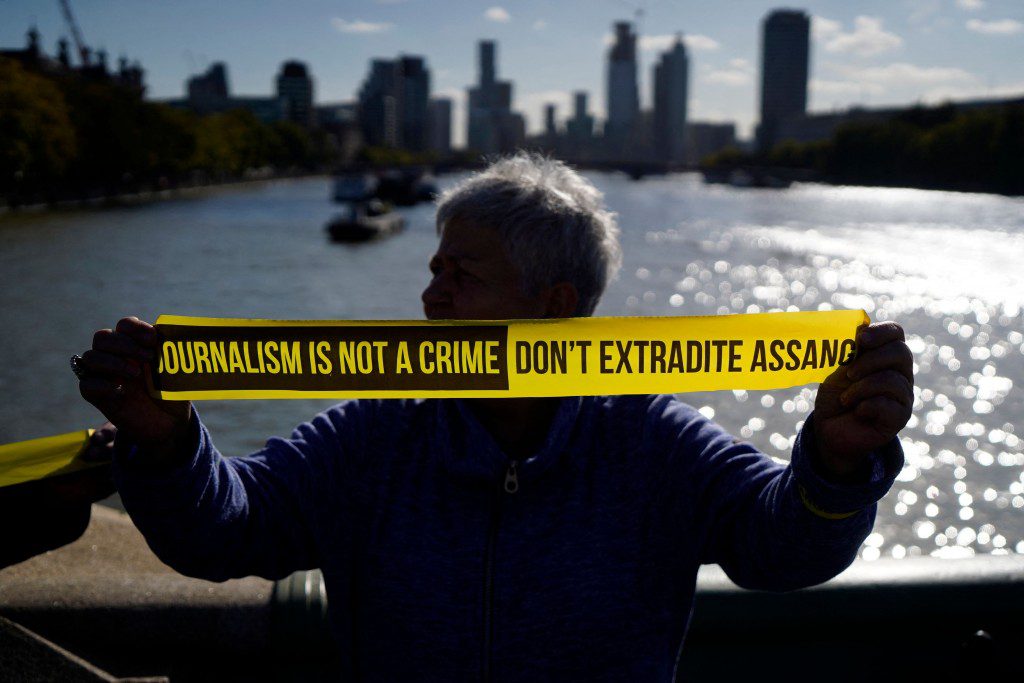 A supporter of WikiLeaks founder Julian Assange protests opposite the Houses of Parliament, in London, on October 8, 2022.

Still, the Garland guidelines come with potential loopholes — what the guidelines call exceptions in “certain circumstances.” The Justice Department can still go after reporters “when necessary to prevent an imminent or concrete risk of death or serious bodily harm, including terrorist acts, kidnappings, specified offenses against a minor, or incapacitation or destruction of critical infrastructure, in which case the authorization of the Attorney General is required.”

Those exceptions could be defined strictly or loosely, depending on the attorney general and the national climate. For example, after the September 11 attacks on New York and Washington, there were many false alarms about possible follow-up attacks on bridges, airports, and other targets that were considered “critical infrastructure”; another period of that kind of fearmongering could easily see a new crackdown on the press.

The guidelines also state that the protected “newsgathering” process does not include “criminal acts committed in the course of obtaining information or using information, such as: breaking and entering; theft; unlawfully accessing a computer or computer system; unlawful surveillance or wiretapping; bribery; extortion; fraud; insider trading; or aiding or abetting or conspiring to engage in such criminal activities, with the requisite criminal intent.”

Garland’s definition of acceptable newsgathering activities is likely to be tested when Assange is prosecuted. Assange was originally charged during the Trump administration for conspiring to leak classified documents; prosecutors focused on the process by which Chelsea Manning, a former Army intelligence analyst, obtained U.S. military reports and State Department cables and conveyed them to WikiLeaks. Many of those documents were also shared with major news organizations, which published stories about them. That prompted a debate, which has never been fully resolved, about whether Assange is a journalist.

Assange is now in prison in Britain and is facing extradition to the United States, where the Biden administration plans to prosecute him under the Espionage Act. He has not been charged in connection with the role that WikiLeaks played in Russia’s efforts to interfere in the 2016 U.S. presidential election.

That is a charge that could be leveled against any reporter covering national security.

The indictment says that Assange and WikiLeaks “repeatedly sought, obtained, and disseminated information that the United States classified due to the serious risk that unauthorized disclosure could harm the national security of the United States.” That is a charge that could be leveled against any reporter covering national security. The Assange prosecution thus conflicts with the new Garland guidelines, which clearly state that the Justice Department will not target journalists for the processes they use in obtaining and publishing classified information. To make an exception of Assange, the Biden administration will have to explicitly make the case that Assange is not a journalist.

Of course, the Garland media guidelines will not provide much protection for reporters if Donald Trump ever returns to power. Trump has made it clear that he will try to crush press freedom in America if he is elected president again; at a recent rally in Texas, he insinuated that reporters should be raped in prison to force them to reveal their sources.