Israel Tightens Restrictions on Travel to the Occupied Territories

Sandra Tamari was traveling to a family wedding in the West Bank when security officers at Israel’s Ben Gurion Airport pulled her aside. For hours, they questioned her about her parents, grandparents, employer, and previous travels. They ordered her to write the names and contact details of everyone she planned to visit and made her list all her email addresses. Then, a security officer turned a computer screen toward her and ordered her to log into her Gmail account.

“That’s when I said, ‘No way,’” Tamari, a U.S. citizen of Palestinian descent, told The Intercept. When she refused, she was detained overnight and then deported back to the U.S. An officer told her she was denied entry because she posed a security threat.

While the West Bank and Gaza are occupied territories and not part of Israel, Israeli officials control access to them, monitoring the movement of anyone traveling there — and regularly denying entry to foreigners who are visiting for personal, family, or professional reasons. For years, international travelers, and particularly those of Palestinian descent, have been at the whims of border officials. The process was often degrading, unpredictable, and arbitrary.

Now much of that process has been codified by the Coordination of Government Activities in the Territories, known as COGAT, the unit of Israel’s Defense Ministry tasked with administering civilian issues in the Palestinian territories that Israel occupies. In a 97-page document issued earlier this spring, COGAT officials introduced a slate of severe restrictions on international travel to the occupied West Bank, which they refer to as “Judea and Samaria.”

“Before this, it was kind of like Russian roulette when you got to an Israeli border crossing if you’re a Palestinian foreign passport holder: You’d just never know, are you going to get in, are you not going to get in,” Zaha Hassan, a human rights lawyer and fellow at the Carnegie Endowment for International Peace, told The Intercept. “Now at least you know what the rules are, and they are all in one place. But the rules are pretty egregious.”

The new rules formalize invasive questioning that has long been the reality for those traveling to the territories. Some — like a requirement that those visiting Palestinian family members disclose a series of personal details about them — have always been the norm. But the rules also include a new slate of restrictions that Palestinians in the diaspora warn will drastically curtail their ability to visit their families and homeland. They include a condition that visitors disclose details about any land they might own or expect to inherit in the territories, a limit to the number of trips one can make, and a requirement that visitors apply for a permit 45 days before traveling — a measure introduced during the Covid-19 pandemic, ostensibly for public health reasons, that Israel is now seeking to make permanent.

The rules also curtail the travel of non-Palestinian visitors to the territories, including caps on the number of visiting scholars and students. But they do not apply to those seeking to travel to Israeli settlements in the West Bank, which are illegal under international law but which Israel effectively treats as an extension of its territory. The rules were slated to kick in later this month, but a legal challenge raised by an Israeli group has temporarily delayed implementation to early this summer.

While they apply to Palestinians holding any foreign passports, as well as non-Palestinian foreigners visiting the territories from anywhere else in the world, the rules have raised particular concerns for Palestinian Americans, many of whom have long felt the U.S. government is doing far too little to address Israel’s discriminatory policies toward them. At least two draft letters are currently circulating among legislators, asking U.S. officials to address Israel’s new restrictions on travel to the West Bank.   A spokesperson for the U.S. State Department wrote in a statement to The Intercept that officials there “continue to study the new regulations and are engaging with Israeli authorities to understand their application and encourage additional consultation with stakeholders before implementation.” The spokesperson added, “We seek equal treatment and freedom to travel for all U.S. citizens regardless of national origin or ethnicity.”

A spokesperson for Israel’s Ministry of Defense deferred questions to COGAT, which did not respond to a request for comment.

U.S. critics of the rules note that they come at a time when U.S. officials can exercise particular leverage, as Israel is currently seeking to join the U.S. visa waiver program, which allows visitors from participating countries to travel to the U.S. for business or tourism without a visa. In March, the U.S. and Israel signed an information exchange agreement bringing Israel closer to approval for the program. The State Department spokesperson said that officials are “reviewing the regulations in detail in order to determine if there is any linkage to the requirements of the Visa Waiver Program.” He added, “The U.S. government continues to work with Israel towards fulfilling all program requirements, including extending reciprocal privileges to all U.S. citizens and nationals upon arrival — including Palestinian Americans.”

Participation in the visa waiver initiative is predicated on reciprocal treatment — meaning Palestinian Americans seeking to enter Israel and the West Bank should expect the same guarantees as Israeli citizens traveling to the U.S. That’s hardly the case currently: For instance, U.S. citizens who also hold Palestinian IDs are denied access to Ben Gurion Airport altogether and must travel through Jordan, while other U.S. citizens can travel through Israel.

“In the past, American citizens have complained to the State Department about discrimination, and the U.S. response has always been that Israel has sovereign right to exclude people it doesn’t want,” Hassan said. “But the problem here is that Israel is not sovereign over the West Bank. It’s occupied territory.” She added, “This is actually a moment in which the U.S. could very well help to change policies that are impacting Americans attempting to work, study, and visit in the West Bank.” 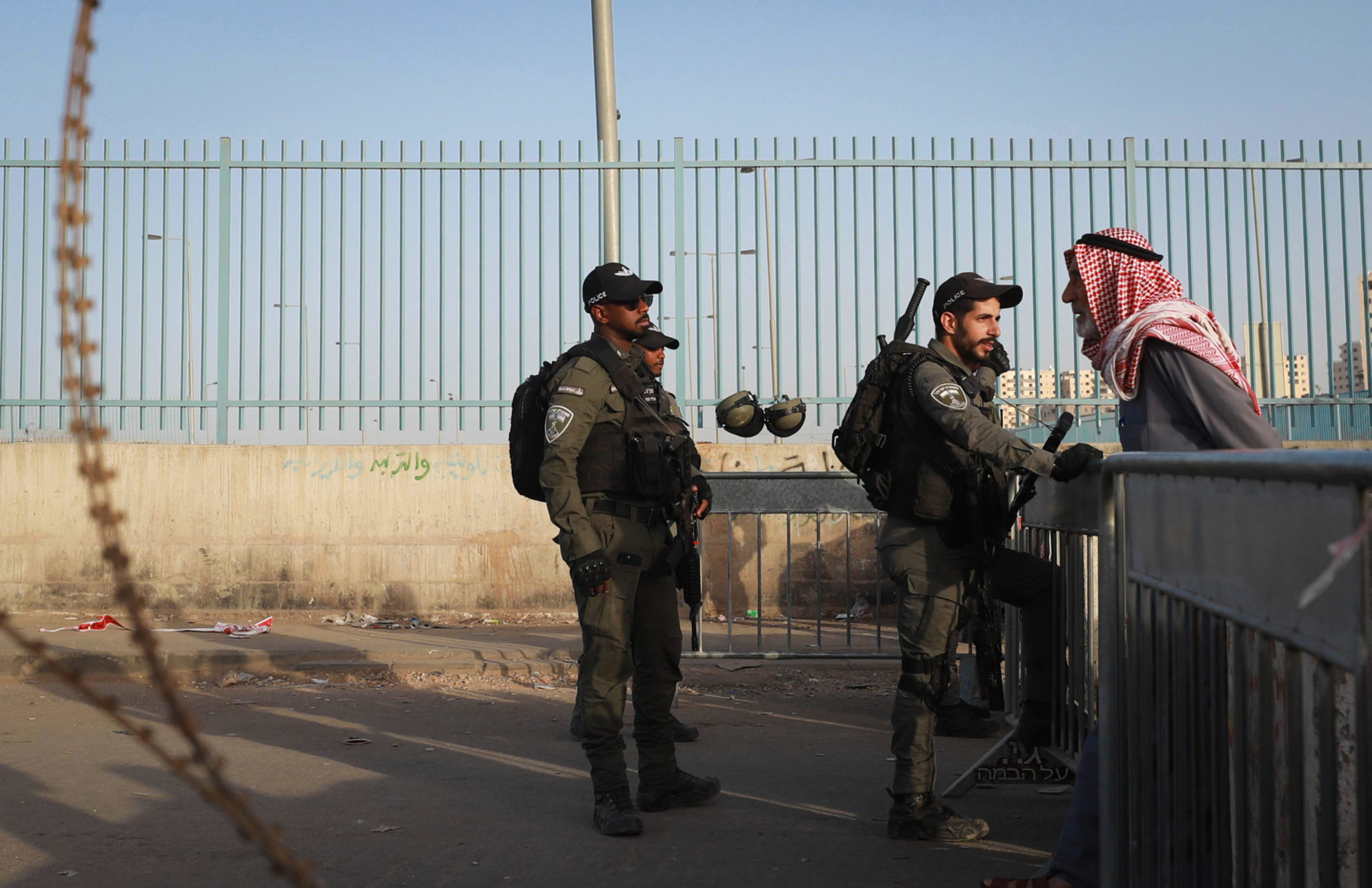 Palestinian passes through an Israeli security checkpoint from Ramallah into Jerusalem on April 29, 2022, in Ramallah, West Bank.

The new COGAT rules appear to serve multiple purposes: by discouraging travel to the West Bank, they further isolate Palestinians and seek to undercut growing global solidarity with them. They limit the ability of foreigners of Palestinian descent to maintain ties with their families and homeland. And they enable the large-scale collection of personal data on anyone traveling to the territories, feeding into a sprawling surveillance effort already underway that some have dubbed Israel’s “Facebook for Palestinians.”

“Israel is in the process of creating this massive data project, mapping Palestinian relationships, property holdings, and all kinds of other information,” said Hassan. “This is something they have always done. But now they want you to proactively give them that information.”

“Israel is in the process of creating this massive data project, mapping Palestinian relationships, property holdings.”

The requirement that those applying for permits to visit the West Bank disclose details about land they might own or inherit has caused particular alarm, raising echoes of the “Absentee Property Law” by which Israel has justified expropriating the land of countless Palestinians who left, fled, or were forcibly expelled during its founding. The provision in the new rules is especially concerning to those owning property in “Area C,” a large swath of the West Bank where illegal Israeli settlements are fast growing.

“Maybe if you have property in Area C you don’t get in, and maybe under Israeli military law, if a property is abandoned, then the state can take it,” said Hassan, in reference to the new travel requirement. “The issue is that Israel is extending its sovereignty over the West Bank. And these COGAT rules are just an expression of that.”

Palestinian Americans and others critical of Israeli policies have long denounced treatment like the one now codified by COGAT — to little avail. 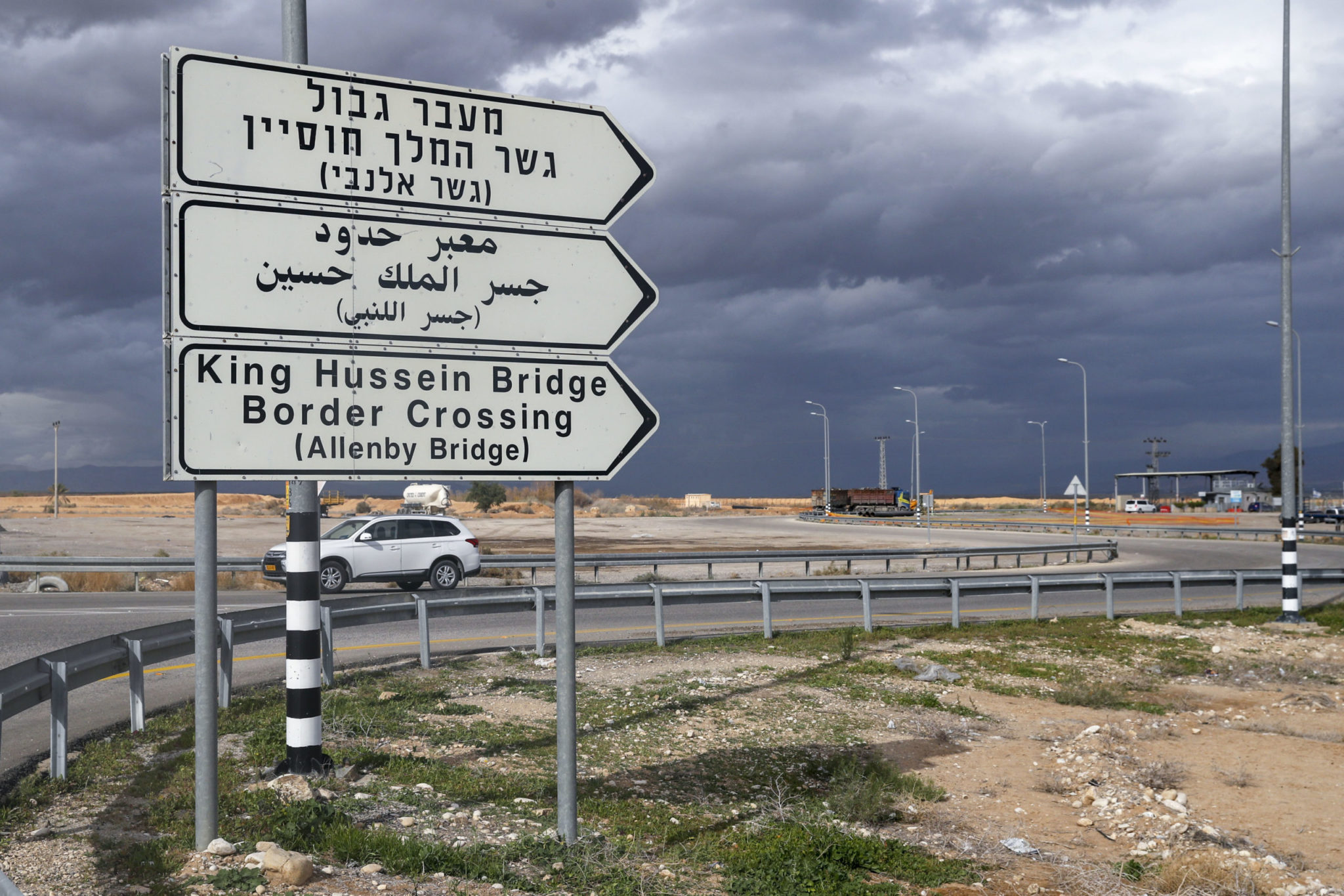 A car drives past a sign for the Allenby (King Hussein) crossing point to Jordan, in the city of Jericho in the occupied West Bank, on Jan. 28, 2021.

When Tamari was detained at Ben Gurion Airport, she was allowed to call the U.S. Embassy. She recalled that the staffer who responded on the citizen services’ line immediately asked her, “Are you Jewish?” When she said that she was Palestinian, the staffer told her, “There’s really nothing we can do for you,” she says.

“The issue is that Israel is extending its sovereignty over the West Bank. And these COGAT rules are just an expression of that.”

Back in the U.S., Tamari spoke with her congressional representative, and she and her supporters delivered a petition to the State Department and met with officials involved with consular services in Israel. “None of the information we presented was surprising to them,” she told The Intercept. “I don’t think there’s any motivation on the part of the U.S. to protect Palestinians.”

The failed trip was Tamari’s last attempt to visit her family’s homeland: “I have missed out on a whole generation of cousins that I haven’t met,” she said.

Her ordeal was hardly unheard of for Palestinian holders of foreign passports who are regularly turned away by Israeli officials. “There are hundreds and hundreds of stories of Palestinians with U.S. passports who have been denied entry,” Tamari said. “The separation of families is part of the Israeli weaponry against Palestinians, and it’s unfortunately very painful and traumatic.”

So far, few U.S. legislators have been willing to criticize Israel’s treatment even of U.S. citizens.

“We know that Congress has the capacity to really influence these sorts of decisions, especially because at this point, there’s a large population of Palestinians in the United States who would be directly impacted by this,” Iman Abid-Thompson, national director of advocacy and organizing at the U.S. Campaign for Palestinian Rights, told The Intercept.

“If there’s a silver lining to be looked at upon here, it’s the fact that we are now able to see, verbatim, what it is that we have been saying,” she added. “The United States can look past it, if it so chooses, as it already does, or it can actually see what Palestinians have been saying for decades.”

The post Israel Tightens Restrictions on Travel to the Occupied Territories appeared first on The Intercept.

‹ Liberals Are Celebrating a New Book on Rural Trump Voters That Falls Apart Under the Simplest Inspection
Geofence Warrants and Reverse Keyword Warrants are So Invasive, Even Big Tech Wants to Ban Them ›