More than a decade ago, the clothing world’s ultimate would-be do-gooder, Patagonia, partnered with Walmart to clean up the fashion industry’s environmental image. The reason was obvious: The garment industry is the second largest polluter in the world.

The cooperation between the leading brands eventually led to the Sustainable Apparel Coalition, which would go on to create a standard by which fashion companies could be graded for ecological impact. Now, those standards — despite criticisms that they lead to toothless regulatory frameworks and produce misleading ratings — could be codified in the fashion capital of the United States.

The Fashion Sustainability and Social Accountability Act, introduced in the New York State Assembly in October 2021, has been heralded as history-making. The act proposes all fashion companies that do business in New York and generate more than $100 million in revenue must map out at least 50 percent of their supply chains and disclose impacts such as greenhouse gas emissions, water footprint, and chemical use.

“They’re colluding with the fossil fuel industry to protect their bottom line.”

Critics of the proposed law, however, worry that it would make history for its negative impact: They say the measure was written to greenwash fossil fuel manufacturing by fashion’s worst climate offenders who depend on cheap synthetic fibers — allowing for massive profits, while masking the products’ true environmental costs.

“They’re colluding with the fossil fuel industry to protect their bottom line,” said Dileep Kumar, the program coordinator of the International Sericultural Commission, a nonprofit focused on the global silk industry.

The proposed New York law is part of a larger effort by groups backed by clothing manufacturers to present an environmentally friendly image. Along with the New York bill, organizations like the Sustainable Apparel Coalition are leaving their fingerprints on other environmental legislation, such as the European Commission’s Product Environmental Footprint.

Concerns about the framework proposed in the New York law are already coming under scrutiny in some countries. The Sustainable Apparel Coalition’s Higg Index, a standardized supply chain measurement tool used by some clothing labels to show their social and environmental footprint to consumers, is reportedly facing a ban in Norway after the country’s consumer watchdog raised “greenwashing” concerns this week.

The proposals are based on sustainability targets, and its reporting methods are created by the Sustainable Apparel Coalition and other networks of self-promoting “independent” organizations.

While the widely recognized goal of climate change efforts is to reduce emissions, brands appealing to the Sustainable Apparel Coalition can win high scores even as the level of pollution they create increases annually. The apparent paradox should not come as a surprise: The boards of these industry-backed groups are cross-pollinated with some of the fashion industry’s worst offenders, meaning the members of these organizations each have a stake in the continued growth — and profits — of the industry, rather than the reduction of emissions.

By setting goals that are, in essence, internally created by its biggest culprits, fashion has ensured it remains accountable only to its shareholders.

“Both [laws] could easily increase consumption rather than reduce it.”

“Frankly, if the industry itself were drafting the legislation, both the New York act and the EU PEF are the sort of thing that they would propose,” said Veronica Bates Kassatly, an independent researcher who evaluates sustainability claims. “Neither requires any fundamental change in the business model and both could easily increase consumption rather than reduce it, by suggesting to consumers that their shopping is now sustainable.” 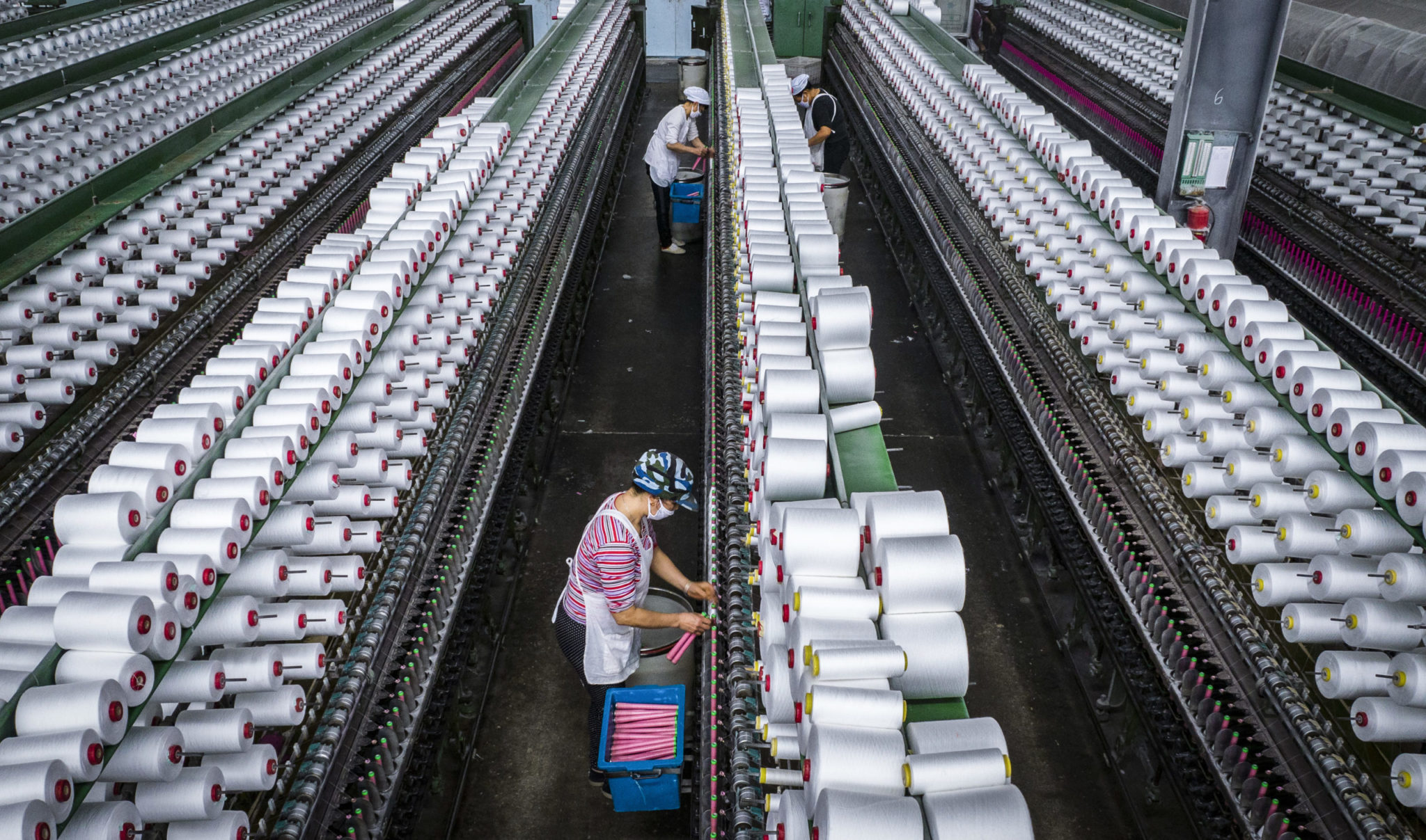 An employee works on the production line of polyester yarns at a textile factory on Jan. 18, 2022, in Xinyu, China.

Fashion’s bid to rescue its image began in 2009 when Patagonia and Walmart wrote a joint letter “inviting CEOs of leading global companies to come together to develop an index that would measure the environmental impact of their products.” The Sustainable Apparel Coalition was formed as a result in 2010, and the group and the companies behind it worked together to produce their measurement tool, the Higg Index. Patagonia did not respond to a request for comment, and the Sustainable Apparel Coalition declined to answer The Intercept’s questions.

A central piece of the New York Fashion Act known as the Higg Materials Sustainability Index, or Higg MSI, is a database that ranks the environmental impact of fibers used in manufacturing. The proposed New York law says it relies on the reporting standard — the Higg Index — pushed by a research nonprofit called the World Resources Institute. Liz Cook, a vice president at the institute who sat on the Sustainable Apparel Coalition board from its beginnings until her term ended in 2021, eventually even went into fashion herself, launching an underwear brand in September 2020.

“WRI is not involved with the drafting of the environmental legislation,” a spokesperson for the institute said. “We also are not in the business of promoting SAC or its derivatives.”

“WRI has worked with the apparel industry on setting and delivering on science-based targets on climate change,” the spokesperson continued, pointing to its role as a founding member of Science Based Targets, an initiative aimed at apparel and footwear companies, founded by Nike. “WRI believes in the importance of setting targets and rigorously tracking emissions in all sectors, and in holding companies accountable to their climate commitments. WRI is proud of this guidance, as it aligns with our mission to reduce greenhouse gas emissions in line with what science requires.”

Analysts have repeatedly criticized the Higg MSI for using dubious data to promote polyester — a material which only became widely used 20 years ago and now accounts for 60 percent of the industry’s products — as the most sustainable fabric available. Dileep Kumar’s group, the International Sericultural Commission, wrote to California’s attorney general in June 2021 claiming the Sustainable Apparel Coalition publicized “false information” in order to “bring credibility to their unfair practice.”

Some critics of the ranking of various fibers suggested other factors were at play in judging what was sustainable; several noted that the Higg MSI ranks the cheapest materials as the most sustainable. “They’re deliberately marketing polyester as sustainable,” said Kassatly, the sustainability claims researcher. Kassatly said the Higgs MSI tends to list materials from least expensive to most expensive.

The Higg MSI does not collect primary data or conduct its own studies. Instead, the index collates secondary data from life-cycle analyses, which track impacts of products from sourcing of materials to their eventual demise.

Take polyester. The Higg Index uses a life-cycle analysis produced by Plastics Europe, which gathered data on European-produced polyester from 2009. Yet 93 percent of polyester is produced in Asia, where manufacturing and energy standards vary wildly between nations and companies. 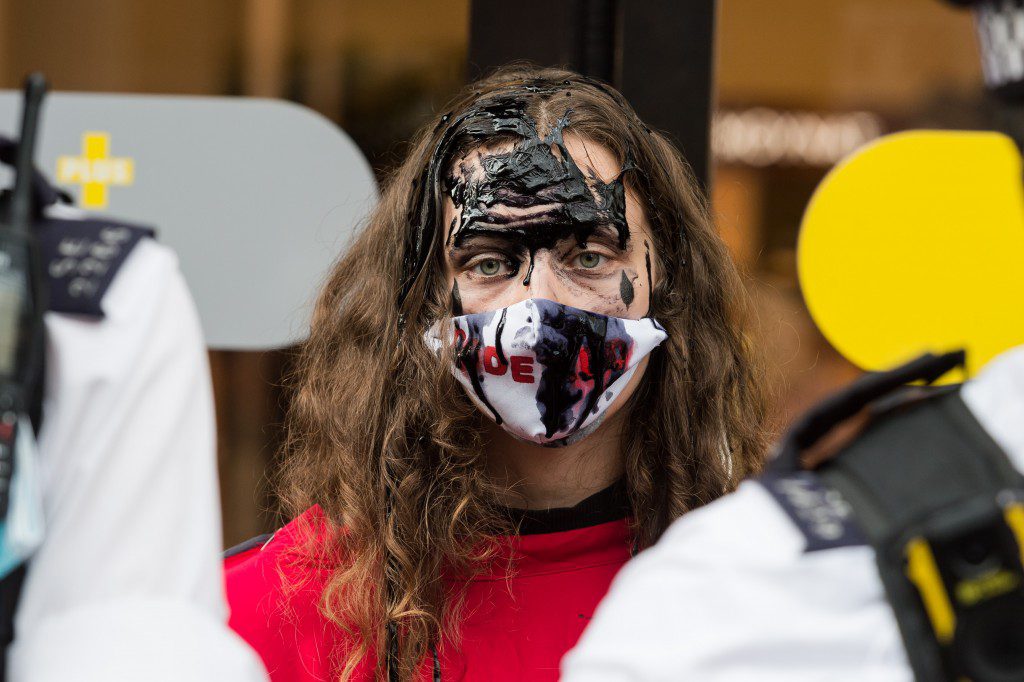 An environmental activist from Extinction Rebellion with face covered in fake oil protests the fashion industry’s reliance on synthetic polyester and nylon textiles made from petroleum on Aug. 24, 2021, in London.

Neither do the chemicals used in polyester production get a full airing. The synthetic wins praise because, unlike natural fiber production, it does not depend on pesticides and fertilizers. The ranking elides that antimony, a suspected carcinogen, is a chemical element used in the production of polyester.

Nor does the Higg MSI take into account the full life cycle of each material, only measuring its “cradle to gate” impact — excluding what happens after the products are sold — despite the life-cycle analyses covering the products’ whole lifetimes. For synthetic fibers, this means microplastics, which shed with every wear and wash — and deemed to have dangerous and toxic effects, according to recent research — are not considered.

The Higg MSI is equally notorious for refusing to disclose information. The International Sericultural Commission says the creators of the index refused to provide the study used to create the ratings for silk manufacturers.

This lack of transparency is common among enterprises associated with the Sustainable Apparel Coalition. The group is based in California but was only registered in 2012 as a foreign company under the jurisdiction of Delaware, a state well known for enabling companies and individuals to hide their finances and intent. Patagonia’s Rick Ridgeway and Walmart’s Ken Lanshe created the nonprofit, but it was Sustainable Apparel Coalition CEO Jason Kibbey who signed the company documents — after his internship with Patagonia during business school.

In 2019, Kibbey founded a company called Higg, again with a Californian address but under the jurisdiction of Delaware. The company, which says it is an independent technology company that licenses the MSI from the the Sustainable Apparel Coalition, declined to comment about the practices used in creating the MSI.

Critics say that the refusal to offer more information on the index is a feature of both Higg’s and the Sustainable Apparel Coalition’s work. For instance, when the rating of polyester dropped from 45/kilo to 36.2/kilo overnight on the Higg MSI in May 2021, the new numbers bestowed an even better sustainability ranking on the plastic-based fiber. Experts cannot explain the change, and Higg and the coalition have not publicly offered their reasoning. 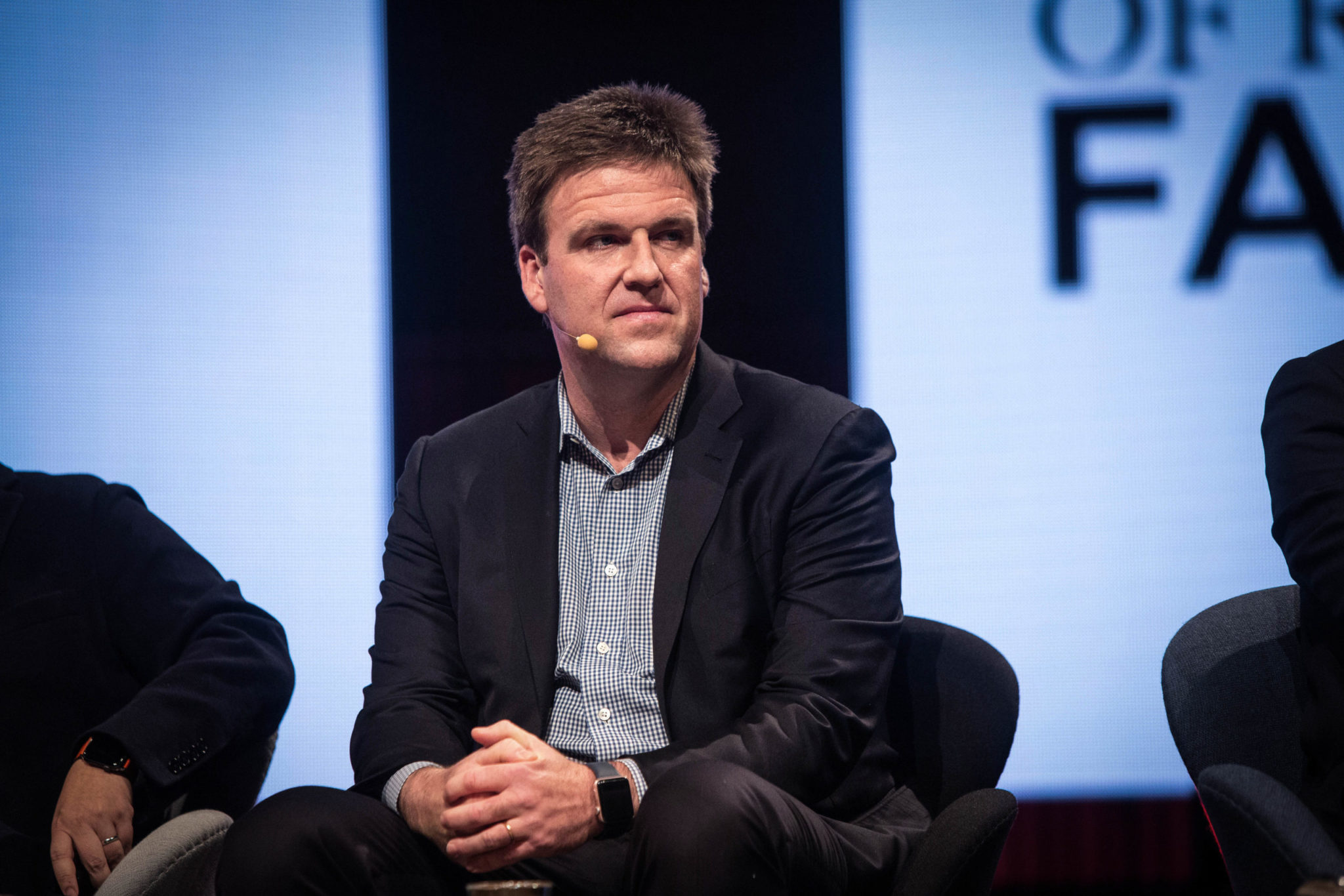 From politics to oil and gas, this fashion network seems to have a finger in every pie in the U.S. and abroad. Like a greenwashing merry-go-round, the Sustainable Apparel Coalition and other “sustainability” organizations share a host of board members, funders, and, in some cases, are even based in the same building. The intertwining networks can make for strange bedfellows.

The building in Amsterdam that houses the Sustainable Apparel Coalition office there, for instance, also houses the Laudes Foundation, a philanthropic organization. Laudes is connected to the Sustainable Apparel Coalition because the foundation funds the group whose reporting standards the proposed New York law uses, the World Resources Institute. Laudes, for its part, was created by the Brenninkmeijer family, which made its fortune from the apparel retail giant C&A.

The links prompted a group of independent experts to write an open letter to the New York Fashion Act’s Democratic co-sponsors.

The family also owns Cofra Holdings, which through a subsidiary in turn owns energy firms doing oil and gas fracking in North America. The Sustainable Apparel Coalition, then, ends up being linked to the oil and gas industry whose products are frequently used in the production of polyester.

Many of the groups involved in the sustainable apparel machine are peppered with these sorts of connections. The links prompted a group of independent experts — including Veronica Bates Kassatly — to write an open letter to the New York Fashion Act’s Democratic co-sponsors, Sen. Alessandra Biaggi and Assemblymember Anna Kelles. The experts warned them that the proposed law used ambiguous language and suffered from “poor data integrity.” They pushed for removing the World Resources Institute from the bill.

Biaggi said her office met with some of the activists behind the letter, opened a dialogue with them, and proposed amendments to the bill accordingly in an effort to “fine tune” the proposal. “I want to be clear that the requirements for companies to reduce and report their green-house gas emissions remain an open issue,” Biaggi said. “We share the goal of requiring companies to use site specific data — and most importantly, providing the right tools for rapid decarbonization of the industry.”

The activists noted that the World Resources Institute had not, however, been removed from the bill. One of the signatories then followed up on the issue; that letter was ignored, the activists said, until an hour after The Intercept’s inquiry to Biaggi’s office.

The latest version of the bill is no longer available to download on the New York State Senate website, but The Intercept reviewed a leaked copy. For the meantime, the language and models the experts warned against — citing the World Resources Institute — remains in.

‹ How the FBI Tried to Ambush My Meeting and Arrest a Source
EFF to Inter-American Court of Human Rights: Colombia’s Surveillance of Human Rights-Defending Lawyers Group Violated International Law ›