For over thirty years, the Electronic Frontier Foundation (EFF) has awarded those paving the way for freedom and innovation in the digital world. Countless luminaries working in digital privacy and free speech gathered for this Pioneer Award Ceremony in San Francisco over the decades. This year, we are excited to relaunch that annual celebration as the first-ever EFF Awards!

The EFF Awards is a new ceremony dedicated to the growing digital rights communities whose technical, social, economic, and cultural contributions are changing the world. We can feel the impact of their work in diverse fields such as journalism, art, digital access, legislation, tech development, and law.

All are invited to attend the EFF Awards ceremony! The celebration will begin at 6 pm. PT, Thursday, November 10 at The Regency Lodge, 1290 Van Ness Ave. in San Francisco. Register today to attend in person. At 7 pm PT, the awards ceremony will stream live and free on Twitch, YouTube, Facebook, and Twitter. 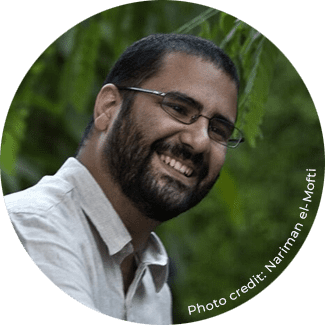 Alaa Abd El-Fattah, 40, is an Egyptian-British blogger, software developer, political activist, and perhaps the most high-profile political prisoner in Egypt if not the entire Arab world.

He was instrumental to the creation of the Arab blogger and techie networks, he ran one of Egypt’s longest-running and most-celebrated blogs, and co-founded a trailblazing Egyptian blog aggregator. In 2005, his Manalaa blog won the Special Reporters Without Borders Award in Deutsche Welle’s Best of Blogs competition.

Though his arrests for activism date back to 2006, he has been imprisoned by the Egyptian government for all but a few months since the 2013 coup d’etat. He has been repeatedly arrested for alleged crimes such as organizing protests without authorization; most recently he was sentenced in December 2021 to five years in prison for sharing a Facebook post about human rights violations in prison. He began a hunger strike in April 2022, recently passing 200 days, and is reported to be in failing health. As of Monday, November 7, 2022, he is refusing water in addition to his hunger strike, increasing fears for his life.

An anthology of his writing—including some pieces smuggled out from jail—was translated into English by anonymous supporters and published in 2021 as You Have Not Yet Been Defeated. A fierce champion of free expression, an independent judiciary, and government accountability–even at immense personal cost–he still advocates for democratic reforms, tech freedoms, and civil and human rights in Egypt and elsewhere.