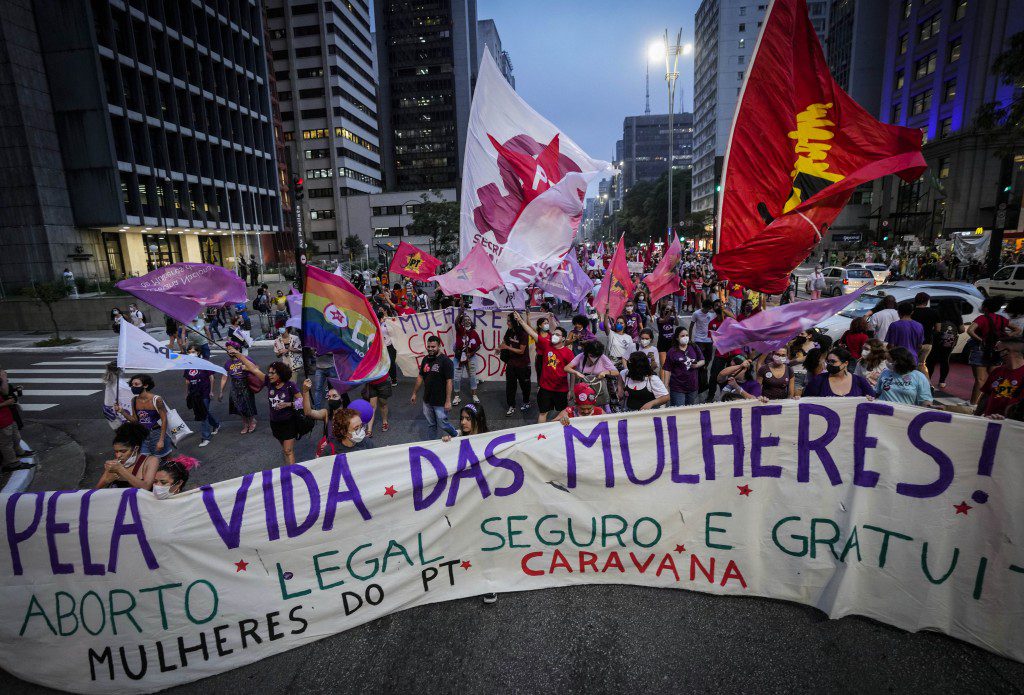 Women march and hold a banner in favor of legalizing abortion, to mark International Women’s Day in Sao Paulo, Brazil, on March 8, 2022.

In recent weeks, a little girl has been fighting for her abortion rights in a Brazilian court.

The 11-year-old child was being forced by the courts to carry a pregnancy after she was raped, The Intercept Brasil reported. The girl, with the support of her mother, had sought an abortion as soon as the pregnancy was discovered — when she was just 10 years old.

A hospital in Santa Catarina, the southern state where they live, refused to perform the procedure without seeking judicial approval first, as the fetus was then 22 weeks old: two weeks past the hospital’s policy of not performing abortions after 20 weeks.

Though a directive from the Brazilian Health Ministry recommends a 20-to-22-week cutoff for abortions, the penal code allows for abortions in cases of sexual violence, without imposing any limitation on weeks of pregnancy and without requiring judicial authorization. The pregnant child, however, found herself before a judge, the growing fetus putting her young life at greater risk with every passing day.

Instead of allowing the mother to take the girl for a legal abortion, Judge Joana Ribeiro Zimmer ordered that the girl be separated from her family and go into a shelter — allegedly to protect her from further abuse. But Ribeiro Zimmer also made telling comments that the move to effectively block the abortion was to avoid what the judge incorrectly called a “homicide.”

Only after the Intercept Brasil’s reporting was a court decision enacted this week that permitted the girl to leave the shelter. She is now over 29 weeks pregnant.

Only after the Intercept Brasil’s reporting was a court decision enacted this week that permitted the girl to leave the shelter. She is now over 29 weeks pregnant.

Ribeiro Zimmer was then placed under investigation by a national judicial body. My colleagues in Brazil obtained footage of the hearing in which the judge denied the girl abortion access, including a particularly disturbing exchange. The judge’s remarks mirror the words of Supreme Court Justice Amy Coney Barrett, who has suggested that “safe haven” adoption laws justify banning abortions, since relinquishing a baby for adoption removes the “undue burden of motherhood.”

The cruelty of such logic was plain to see in the Santa Catarina courtroom. “Today, there is technology to save the baby. And we have 30,000 couples who want the baby, who accept the baby,” Ribeiro Zimmer told the pregnant girl’s mother. “Today’s sorrow for you and for her daughter is the joy of another couple,” she said. The mother responded in tears, “It’s joy, because they are not experiencing what I am.”

The Brazilian case is a grim reminder of what it looks like to put the fate of reproductive justice in the hands of a right-wing justice system.

Brazil’s abortion laws are highly restrictive: Providers and abortion seekers are criminalized, with exceptions only in cases when the pregnant person’s life is at risk, in the case of rape, or when the fetus has anencephaly, a condition in which parts of its brain and skull are missing. Many states in the U.S. already operate with similar harsh restrictions. A post-Roe reality has been the de facto status quo for years in dozens of states where abortion can’t be accessed and abortion providers and seekers are already policed and terrorized. Forced births are common.

The girl’s case in Brazil has its counterparts in the U.S. In 2018, for example, U.S. Immigration and Customs Enforcement illegally denied a pregnant minor held in its detention the ability to go to an abortion clinic, until the minor and her guardian sued.

The fall of Roe v. Wade is imminent, and 13 states are ready with trigger laws on the books to automatically ban all abortions in the first and second trimesters — many with no exceptions for rape. The U.S. power structure is replete with Ribeiro Zimmers: ideologues so committed to coercive pro-natalism, that any life, even that of an actual living child, is deemed disposable in service of the unborn.

The Brazilian case clarifies, too, the risks of fighting only for marginal abortion access. A world of reproductive justice is not one in which abortions are only permitted in cases of rape or when there is a risk to the pregnant person’s life. No one should have to announce that they were raped to end an unwanted pregnancy.

Anti-abortion extremists in the judiciary will always run roughshod over technical exceptions. Consider the arrest earlier this year of a 26-year-old woman in Texas on murder charges in connection to a “self-induced abortion.” The charges were dropped, since no such murder statute currently exists in the state, but the incident highlighted the ways in which zealous law enforcement already polices and criminalizes abortion. After Roe falls, it will only get worse.

The Brazilian case clarifies the risks of fighting only for marginal abortion access.

The American right, with its Christo-fascist tendencies, has of course decimated reproductive rights in this country. Liberals share some blame, however, in ceding so much of the discourse to a right-wing fulcrum. As feminist theorist Sophie Lewis wrote in a recent essay, the Clintonian “safe, legal, and rare” framework pathetically cast abortion as the problem — the thing that should rarely happen — rather than unwanted pregnancies, for which abortion is the cure.

The new fight for abortion needs to reject the mealy-mouthed Democratic Party approach of recent decades. Reproductive freedom cannot be something we approach with timidity.

We must fight for abortions as more than a right. Instead, it should be recognized as a social good. The battle must go hand in hand with the fights for universal health care and against the carceral state.

The case in Brazil shows how these struggles are interconnected. The power to confine a person — be it in a shelter, a detention center, or a prison — enables the authorities to readily prevent access to reproductive freedom, even in cases of legal abortion.

We don’t, however, need to just look to Brazil to find horrifying examples of forced pregnancies, just as we do not need to rely on an example from outside of U.S. borders to imagine the horror of a post-Roe world. Rather, the Brazilian case is a reminder that the anti-fascist struggle for bodily autonomy is an international one. We can be certain that Christo-fascists from the U.S. to Brazil to Hungary and beyond share an agenda to shore up patriarchal rule.

The left in the U.S. would do well to look to Latin America not simply for troubling presages of a post-Roe reality, but for inspiration. Feminist movements in countries like Argentina, Colombia, and Mexico with historically draconian abortion laws have seen a wave of reproductive rights victories legalizing and decriminalizing abortion. These movements were explicit in tying the struggle for abortion to the fight for LGBTQ+ rights and expanding access to citizenship — that is, against the intertwined fascist logics of border rule and denial of bodily autonomy.

It is within this robust, collective framework — not through limited calls for “privacy” and “individual choice” — that we in the U.S. should proceed. It is profoundly unconscionable that a raped child should be forced to carry a pregnancy to term. The lesson is not, however, to only protect abortions for abused children. All forced births should be deemed unacceptable.