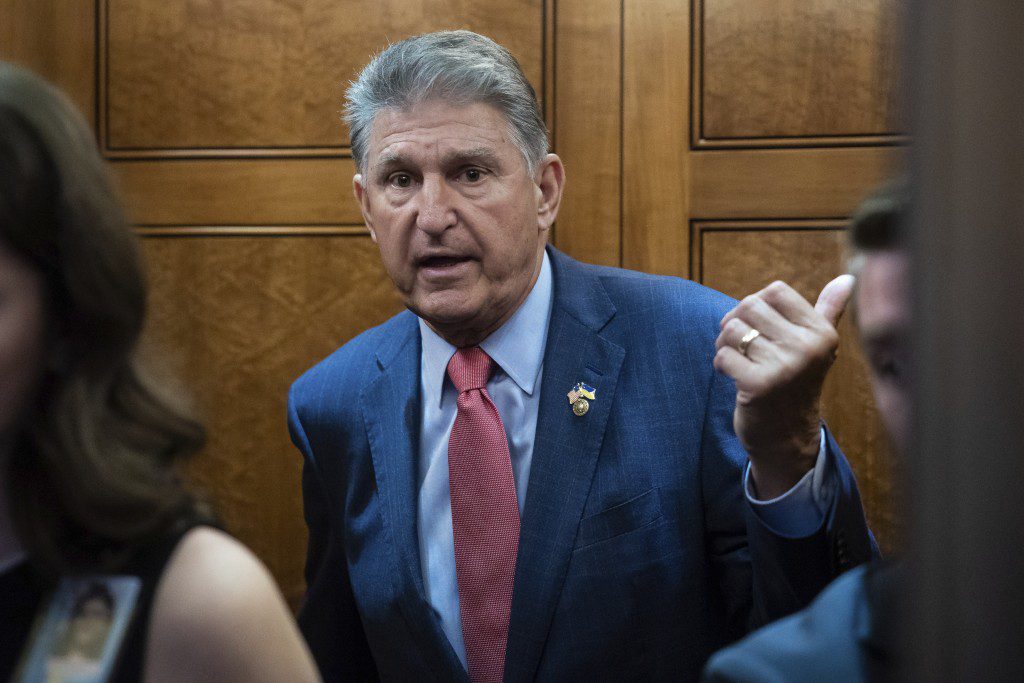 Me, I always had faith in Sen. Joseph Manchin III.

You, having become a bit cynical lately, may have looked at the $1 million the West Virginia Democrat and his wife rake in annually from their coal business and the sadistic delight he takes in killing the hopes and dreams of Democrats, then bringing them back to life only to kill them again. You may have seen all of that and lost faith. But not me.

I’m kidding, of course. On Wednesday evening, seemingly out of thin air, Manchin and Senate Majority Leader Chuck Schumer, D-N.Y., put out a joint statement announcing that they had come to terms on a deal — an entire bill — that they called the Inflation Reduction Act of 2022. I can’t recall a major deal ever being announced without the Capitol Hill press corps knowing that negotiations were taking place.

The outline of the deal, as announced by the pair, looks like this:

Top-line numbers from the draft text of the Inflation Reduction Act.

The $369 billion for “energy security and climate change,” if it becomes law, will change the world. It represents the biggest climate investment made by any country ever, and it will unlock potentially trillions in private capital, which is waiting on the sidelines for the types of subsidies, credits, and guarantees that this bill will include. It’ll also spur other countries to make their own investments, not wanting to fall behind in the industry that will dominate the next century. It’s projected to reduce carbon emissions in the U.S. by 2030 by 40 percent. That’s huge.

“An initial review of the agreement indicates that this will mark a historic direct investment in renewable energy and will unleash hundreds of billions of private investment for moonshot projects,” Rep. Ro Khanna, D-Calif., told me Wednesday evening after the deal was announced. Khanna has spent months working with Manchin to keep him in talks, and it looks like that finally paid off.

“Activists who have been insisting on getting something done on climate should feel proud that we’ve gotten to this point,” he added. Even if the bill doesn’t do everything it ought to, it at least gives humanity a shot.

Climate hawks will criticize the bill for its “energy neutral” approach. The kinds of subsidies made available for clean energy are supposed to be available to projects that clean up dirty energy too, and cleaning coal is seen by many as a ruse actively deployed to stall the transition to clean, renewable energy.

However, looking at the reality of our energy infrastructure, fossil fuels are going to be with us for a very long time. Reducing and/or sequestering their carbon emissions during the transition is essential. It’s the unfortunate reality we’ve been dealt. If this money can spark some exponential technological development in that direction, we’ll all be better off.

Secondly, if all that fails and the carbon tech stuff is all fluff, subsidizing it was still worth the payoff to Manchin to get the clean energy money, because there was no other way at this point. If Republicans take Congress next term, there’s no telling when the window might open again.

And third, it seems like Manchin extracted concessions that could make permitting future fossil fuel projects easier. That’s bad. But those are fights to be had in the future, against a win today.

The Rest of the Bill

I obviously haven’t read the full bill yet, which is more than 700 pages long, but based on what’s known from previous talks, a few things are clear:

The 15 percent corporate minimum tax only hits companies with profits of more than $1 billion a year and operates as a business version of an alternative minimum tax, which, if you’re one of my more well-off readers, you’re familiar with. This is payback from Manchin to Senate Minority Leader Mitch McConnell, R-Ky., for cutting him out of negotiations over the Trump tax cuts. He said so explicitly in a private meeting with the big-money group No Labels last year, which The Intercept obtained audio of.

The drug pricing piece allows Medicare to negotiate with drug companies to lower rates on some drugs. The devil is in the details, but it should lead to some real savings and is opposed with a frothing-at-the-mouth fury by Big Pharma.

On IRS tax enforcement, they propose to spend $80 billion over 10 years to beef up enforcement. The end goal is to have better software that can use basic artificial intelligence to check tax returns for anomalies. Just the knowledge of that could reduce cheating by the rich, and once it’s in place, a lot of the cheating that goes on will become much more difficult.

The “carried interest” loophole allows hedge fund and private equity bros to pay a 20 percent tax rate on their income, while normal rich people are supposed to pay 37 percent. This legislation requires such partnerships to consider that income to be short-term capital gains, which are taxed at the same rate as income. It would fundamentally upend the private equity and hedge fund industry, a good thing all around. That’s the piece that’s most vulnerable to being stripped out, but it has real potential to level the playing field in an important way.

The expansion of the Affordable Care Act subsidies will keep premiums from spiking just before the midterm elections.

And the climate and energy piece you can read here. But it spends billions to boost clean energy manufacturing and provides 10 years of certainty for tax credits, which is essential. It also restores much of the revolutionary agriculture title from Build Back Better.

I’m not saying that we need to assign Robert Caro a new edition of “Master of the Senate,” but let’s pause to admire the way Schumer and Manchin navigated this. Bear in mind that these are two people roundly and frequently derided for their hapless inability to negotiate. But McConnell, who the press loves to talk about as a Senate master, recently threatened to stop a bipartisan bill to subsidize the American semiconductor industry if Democrats didn’t stop talking about passing a climate reconciliation bill. Manchin flipped out, saying McConnell was just as bad as the lefties who wanted to hold up the infrastructure bill to get the climate bill done. Days later, Manchin announced that he was concerned about inflation and walking away from the climate bill, and it looked to most of us — including, apparently, McConnell — like it was completely dead.

Then the Senate passed the semiconductor bill shortly after noon on Wednesday. About four hours later, Manchin and Schumer announced that, actually, they had a deal on a climate bill. And a 700-page bill drafted.

Was the entire walking-away theatrical? At minimum, it seems like they held the news of this deal until they’d safely passed the semiconductor bill. Republicans were so mad last night that they voted down a veterans’ bill they had previously supported in overwhelming numbers. Just out of pique.

This is how Big Mad senate Republicans are at Manchin agreeing to a deal. https://t.co/ZPlR6RdL1T

I’m not used to Democrats playing their cards this well.

OK, so will it pass?

Don’t ask me about Sen. Kyrsten Sinema, D-Ariz., because who knows. Will she blow this up by herself to stave off some corporate and Wall Street tax hikes? I genuinely don’t know.

A spokeswoman for Kyrsten Sinema said the senator hasn’t determined yet whether she could support the Schumer-Manchin deal on climate change, tax and other provisions.

“Senator Sinema will need to review the text. We don’t have comment at this time.”

The second question is the House, specifically Rep. Josh Gottheimer, D-N.J., and his crew of folks who’ve been demanding an expansion of the SALT — state and local tax — deduction. Gottheimer has been saying “no SALT, no deal” from the very beginning, and this includes no SALT. But I spoke with a Democrat very close to Gottheimer Wednesday evening, and he said that because the bill doesn’t raise individual tax rates and doesn’t really touch that portion of the tax code for anybody making less than $400,000, he believes that folks like Gottheimer and his ally in this fight, Rep. Tom Suozzi, will get behind the deal.

And as another Democrat put it to me Wednesday evening, “Gottheimer has blown a lot of gas on his holding up the assault weapons bill to insist that his police funding bill be packaged with it. It’s going to be really hard for him to insist on both that and SALT.”

That leaves Sinema as the only hope for the financial industry in stopping this. Will she stand up to the entire party? I just don’t know.

The post A Manchin Miracle Brings Biden’s Climate Agenda Back From the Dead appeared first on The Intercept.